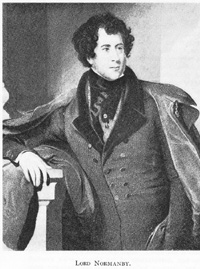 By 1837 many petitions had been received by the British Parliament from both Maori Chiefs and settlers alike, for the Monarchs, from King William to Queen Victoria, to bring law and order to New Zealand. Inter-tribal fighting since the 1820's had cost the lives or enslaved more than 60,000 Maori. The British Parliament was very reluctant to form a colony in the troubled Isles, but finally conceded under pressure of circumstances. On June 13th 1839 Lord Normanby of the Colonial Office and Viscount Palmerston of the Foreign Office agreed on sending an emmisary to New Zealand whose mission it would be to secure a Treaty with the Maori Chiefs. They chose Captain William Hobson to fulfil this very important official commission. He supplied Hobson with a detailed brief, of what he was to accomplish. 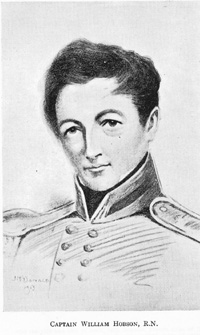 Hobson, born on the 26th of September 1793, had served a very distinguished career in the British Navy. In 1837, as Captain of HMS Rattlesnake, he had visited Northern New Zealand to show a military presence and protect settlers caught between warring Maori factions during fierce inter-tribal fighting. During his years of service in the West Indies he acquired considerable insights into the workings of Colonial Government and adminsitration. On the 25th of August, 1839, Hobson left the port of Plymouth in England and sailed with his family to Australia.He carried with him a 4200 word brief from Lord Normanby outlining his mission and what needed to be agreed to with the Maori Chiefs before New Zealand could become a British Colony. In Australia he had a lengthy period of consultation with Governor George Gipps. Hobson arrived in New Zealand aboard HMS Herald on the 29th of February 1840, fully briefed on what the Treaty must say. 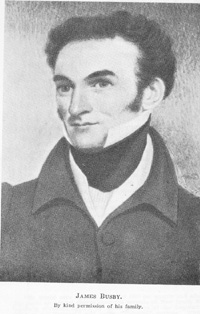 After 13 Northern Maori Chiefs wrote to King William of Britain in 1831, asking him to become their Protector, a decision was made to provide an official British Consul in New Zealand. James Busby of Australia was assigned the position in 1832 and took up office in New Zealand in 1833. Unfortunately, he had no true authority to act in any effective capacity of lawmaking or law enforcement, as New Zealand lay beyond British legal jurisdiction. He wrote up the 1835 Declaration of Independence for the Confederation of United Chiefs in order to have New Zealand recognised internationally as a sovereign nation ruled by its Maori chiefs. He also issued the chiefs with a flag from the King for trading upon the seas, but could do no more. Hobson, upon arrival, relied heavily on the experience of Busby when drafting the Treaty of Waitangi and Busby acted as secretary when the final English draft was written on the 4th of February 1840. 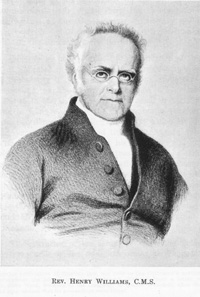 Reverend Williams was a former Royal Naval Officer who had become a missionary. He was the head of the Church Missionary Society at Paihia, Northland , New Zealand from 1823 and a very hard working individual. Like other missionaries, whose effectiveness depended upon how well they mastered the Maori language, Henry Williams was an expert linguist. He had studied and spoken the Maori language continuously for about 17-years when he and his son Edward undertook the task of translating Hobson's final draft of the Treaty, completed on the 4th of February 1840, into Maori. Henry and Edward received the draft at 4pm on the 4th of February and worked on the translation during the evening and night of the 4th and through the early hours of the 5th. It was completed by about 9am, but one Maori word was substituted in thereafter at the request of British Resident, James Busby. Williams read the Maori version to the assembly at Waitangi and later participated in the discussion hui throughout the night, answering questions posed by the chiefs and clarifying points. 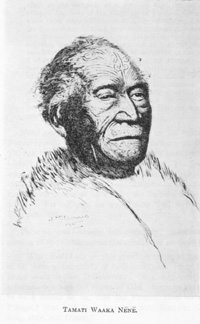 As a war leader fighting alongside his relative Chief Hongi Hika, who started the musket wars, Tamati Waaka Nênê had participated in many raids upon other Maori tribes between 1818 and 1820. He'd been involved in one rampage of killing all the way down the North Island to Cook Strait. Hongi Hika's forces decimated upward of 5000 Maori in Thames, Waitemata, Waikato and Rotorua. The carnage included many captured children from the central North Island tribes, who were ritually sacrificed on the banks of the river near Kaihu in the north. During the Treaty debate at Waitangi on February 5th 1840, Chief Tamati Waaka Nênê argued forcibly in favour of signing the Treaty. In addressing Hobson he said, "Do not thou go away from us; remain for us-a father, a judge, a peacemaker." His words and those of his brother Patuone had great influence and Waaka Nênê was largely responsible for Northern Maori signing the Treaty. He is often referred to as the "Maori Father of the Treaty". It's probable that he'd seen too much warfare and, if lasting peace was not restored, envisioned that Maori would utterly annihilate each other and cease to be. Many Maori in the North were also worried about a French takeover of New Zealand and it's probable that Tamati Waaka Nênê saw a Treaty with the British as a way to avert French annexation ambitions. Concerns about the French had been voiced by Northern Chiefs in a letter to King William in 1831, of which the brother chiefs, Patuone and Tamati Waaka Nênê had been signatories. 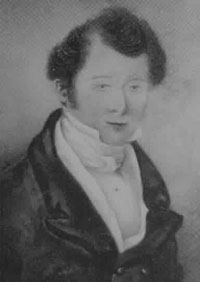 James. R. Clendon was a British citizen and businessman in New Zealand who had accepted the official position of Consul of the United States. He reported, to Washington D.C., any significant political developments related to New Zealand. According to Ian Wards, N.Z. Government Historian (1946-1968) and Chief Historian (1968-1983), a number of individuals were instrumental in creating the final English draft wording of The Treaty of Waitangi on the 3rd-4th of February 1840. Their combined efforts resulted in the final English draft document, which was handed to Rev. Henry Williams at 4pm on the 4th of February, for translation into the Maori language. The "Treaty" writing/ advising participants were, including those named by Wards: William Hobson (Lieutenant Governor), James Busby (British Resident), J.S. Freeman (Hobson's personal secretary), J.R. Clendon (US Consul), H. Williams, (Head missionary) and A. Brown (missionary).

One should add the group who assembled at the request of Hobson on the evening of the 3rd of February 1840. On that night, Hobson asked for and was visited by a number of missionaries - Henry Williams, Charles Baker, George Clarke, William Colenso and Richard Taylor, all of the Church Missionary Society and James Butler from the Wesleyan Mission Society.

Ian Wards, who virtually lived and researched at the National Archives from 1948 until after retirement, well into the 1990's, states in his 1968 book:

'A Treaty, soon to be known as the Treaty of Waitangi, was prepared with the co-operation of Busby, JR. Clendon and two missionaries, H. Williams and A. Brown' (see Shadow of the Land, by Ian Wards, Wellington, 1968, pg. 42). Government Historian, Ian Wards lists one of his sources as, James. Rutherford, The Treaty of Waitangi.

Clendon had been part of the team which put together the 1835 Declaration of Independence for the Confederation of United Chiefs. Others of that team, who also played prominent roles in creating the 1840 Treaty of Waitangi were James Busby, Henry Williams and George Clarke.

The first "Government House" of the colonial government was James Reddy Clendon's home, which was sold to the government. The first "Capital" of New Zealand was the township of Russell, which was built on James Clendon's former farm.

The final English draft of the Treaty of Waitangi was written on W. Tucker 1833 paper supplied by James Reddy Clendon. Compelling evidence suggests that the final draft was also written at the home of James Reddy Clendon, in the presence of William Hobson, James Busby and other advisors.

On the 20th of February 1840 James Clendon sent a near exact copy of Busby's final draft to the US Secretary of State in Washington DC. He is reported to have sent another such copy in late April 1840 with Commodore Charles Wilkes. These copies were, undoubtedly, based upon his own notes, written up as he sat in on the final Treaty drafting incentive on the 4th of February 1840.

KEY PEOPLE INVOLVED IN THE TREATY OF WAITANGI