THE TREATY 2U ROADSHOW

SOMETHING 'WICKED' THIS WAY COMES

It might not have been quite the ending envisioned in Ray Bradbury's 1962 book, but when the Treaty 2-con-U circus finally packed up its big-top at Waitangi on the 14th of May 2006 and rumbled out of town, it left the usual devastation and putrid Marxist aroma in its wake.

During an unfortunate stretch of four full months in 2006 the treaty circus inflicted itself upon cities and towns throughout the country in an attempt to sell very dubious wares and turn the unsuspecting New Zealand public into compliant, mindless zombies. In truth, the exhibit had little or nothing to do with the Treaty of Waitangi persay, or anything much that actually occurred on the ground in New Zealand history. The so-called "treaty" subject matter merely provided an excuse for the well-funded Maori grievance industry to propagandise New Zealanders and, more importantly, impressionable school children, who were forcibly bussed in to the exhibit as captive audiences. 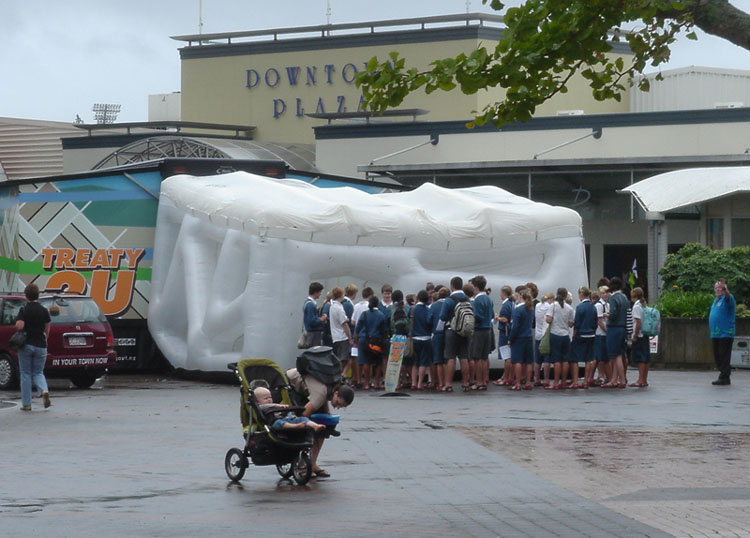 Another town, another herd & hard-sell. One more of the "hundreds of busloads of impressionable young school pupils" arrives for their obligatory indoctrination and brainwashing session. Inside the Treaty 2U exhibit, most of this group will be laden-down with appropriate burdens of manufactured "guilt" and subjected to the concept that they are "second class citizens" who must "pay, pay, pay" the grievance-industry forevermore. The truck-driver of Treaty 2U gives the author-photographer an adoring wave from alongside the "soon to be propagandised" juvenile victims being herded in.

The ONZF protesters, following Treaty 2U from city to city from Northland to Southland, saw this sorry spectacle of bussed-in, captive audience, "lambs to the slaughter" countless times over. We set up a counter exhibit in an effort to provide some balance to the sorry situation of politically expedient pseudo-history being force-fed to our youth. The ONZF display boards showed the "true final English draft" and other very important treaty-related documents... much to the chagrin of the Treaty 2U ideological officers, whose purpose it is to hide those selfsame documents from the discerning public.

A covered trailer (left) of several cubic meters capacity follows Treaty 2U to every new venue. It is kept topped up with reams of mind-deadening propaganda. Any student exiting from Treaty 2U would invariably be laden down with all the items in the centre photo and yet other items including posters, handouts and questionnaires. Many students are alert to the fact that they're being force-fed useless propaganda about the treaty or New Zealand history and much of the worthless literature never makes it past the closest rubbish bin in sight (right). This entire "treaty-education" scam & sham of an exercise, in all its facets & guises, has cost the New Zealand taxpayer very dearly, to the tune of about $15-million dollars so far. 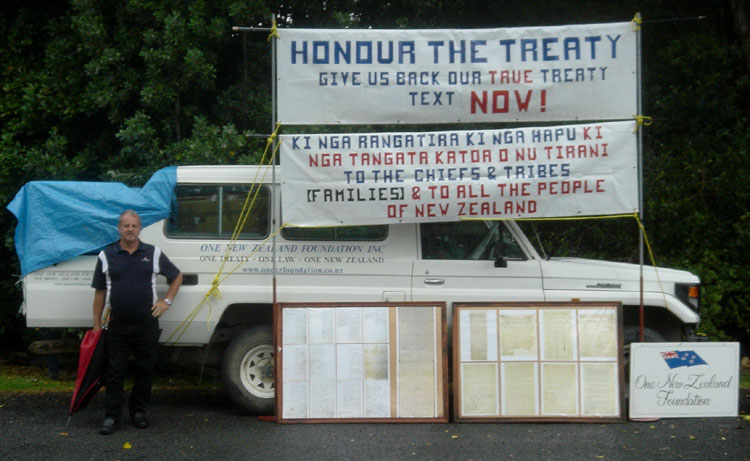 Ross Baker, Chairman of the One New Zealand Foundation, manning the ONZF counter-exhibit against Treaty 2U's grievance-industry propaganda tour, during the 2007 Waitangi commemoration, which ran for four days in February. In the last two days, especially, at Waitangi (weeping waters), the skies opened up and there were some big drenching downpours. 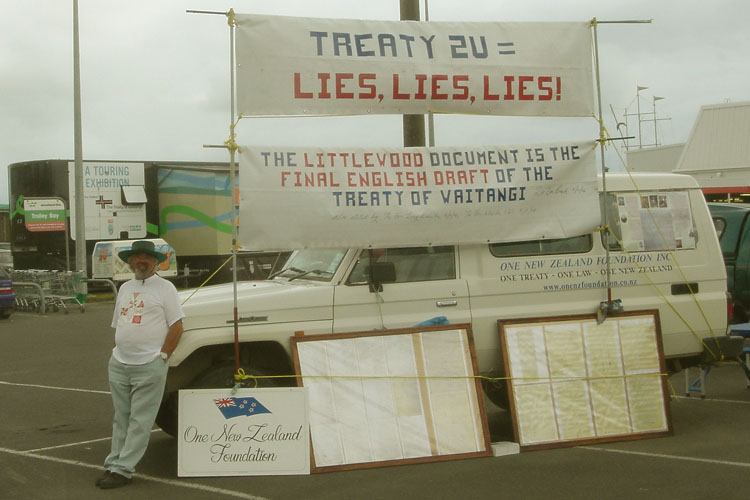 Martin Doutré in sunnier conditions, manning the ONZF counter exhibit against the Treaty 2U's grievance-industry propaganda tour, at Dargaville. The Treaty 2U exhibit bus, seen in the background, was leased from New Zealand Mobile Exhibitions Ltd. of Hamilton in 2006, at a cost of about $500000 for four months use. It was leased again in 2007. 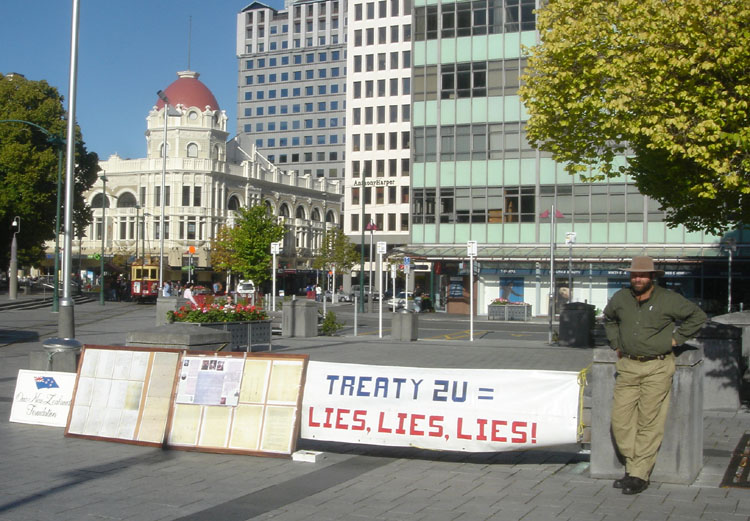 Dispossessed farmer, Allan Titford, the victim of a false Maori land claim in which he was disallowed, by the New Zealand Government, to defend himself or his freehold title, manning the static display at Christchurch Cathedral Square. At many venues around New Zealand, no parking facilities, alongside Treaty 2U's propaganda exhibit, were available to the ONZF protesters, so static displays like this had to be created. 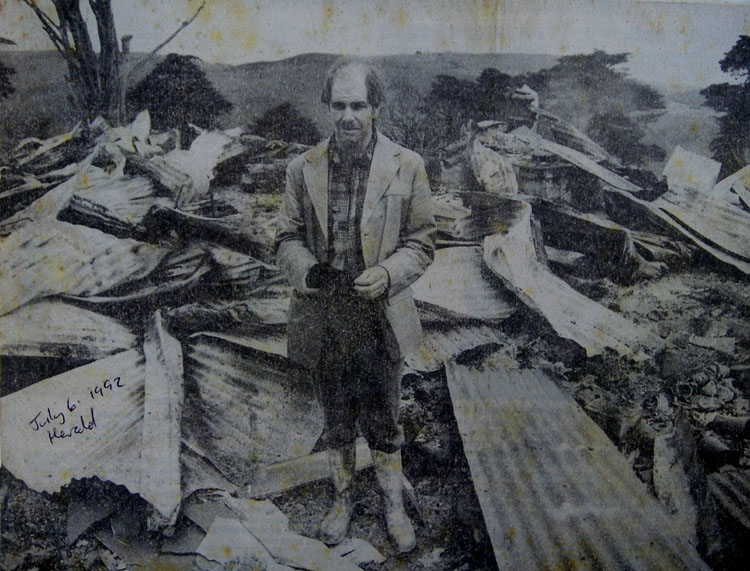 Another time, another place; Allan Titford standing in the ruins of his farm home at Maunganui Bluff in 1992, the second to be burnt to the ground, leaving them with no-where to live and thus forcing them to vacate the property. By this point in time Allan and Susan Titford had been constantly terrorised for five years and the New Zealand government stood back and let it all happen or worked in collusion with the activists. Because of deliberate distortions of the Treaty of Waitangi between 1975 and 1992 or thereafter, up until the present, white New Zealanders were left defenseless by a government whose sworn duty it was to protect them and their freehold titles under the Treaty of Waitangi. The government of New Zealand are not only in breach of Allan & Susan Titford's guaranteed Treaty of Waitangi rights, but are also in breach of The United Nations Universal Declaration of Human Rights 1948, Articles: 1, 2, 3, 5, 6, 7, 8, 9, 10, 11, 12, 16 17, 21 23 and Article 30 or sections within all of the above. Well-documented incidents can be cited to support this contention. See SUBMISSION 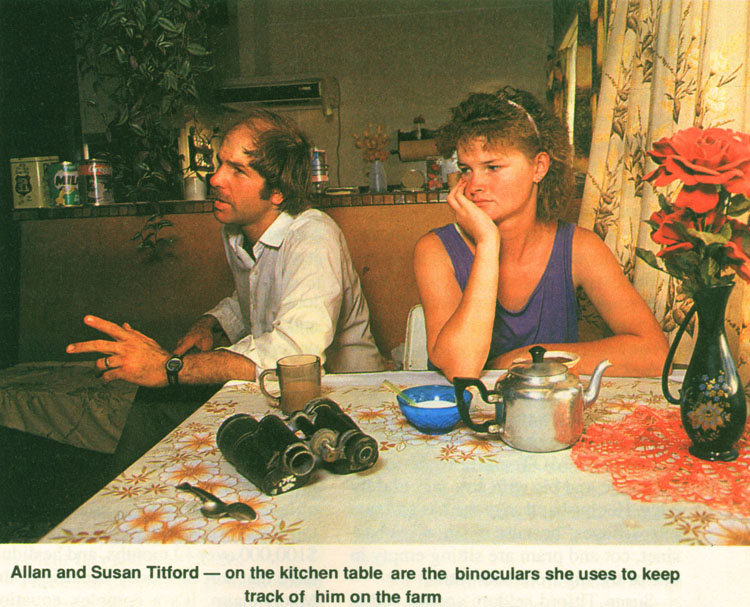 The Titfords, isolated in the middle of Apache county, with hostile, drugged-out and weed-whacked savages all around, ever ready to commit acts of violence for which Allan Titford would inevitably be charged by the police and end up in court or gaol. This is what happens when Marxist social-engineers and activist control-freaks start messing with and distorting our egalitarian Treaty of Waitangi, to disenfranchise the majority of New Zealanders and empower a privileged few greedies. To this very day the Te Roroa claimants have not been able to produce one document to prove their spurious claim, whereas the Titfords have many hundreds dating to the nineteenth and twentieth centuries to prove the Te Roroa claim is transparent, manufactured fraud. The government even had to resort to coercion and falsifying a deed of sale in order to steal the 1653-acre farm off the Titfords. The home in which this photo was taken at the height of Te Roroa and government terrorism, was shortly after torched and the Titfords, thereafter, threatened by the authorities with trespass when they tried to go onto their own property. A free-for-all then ensued, with local farmers, residents, school boards and activists plundering the Titford farm and stealing surviving goods or rustling livestock, while the government turned a blind eye. http://www.treatyofwaitangi.net.nz/TitfordStory/TheTitfordStoryPowerPoint.htm 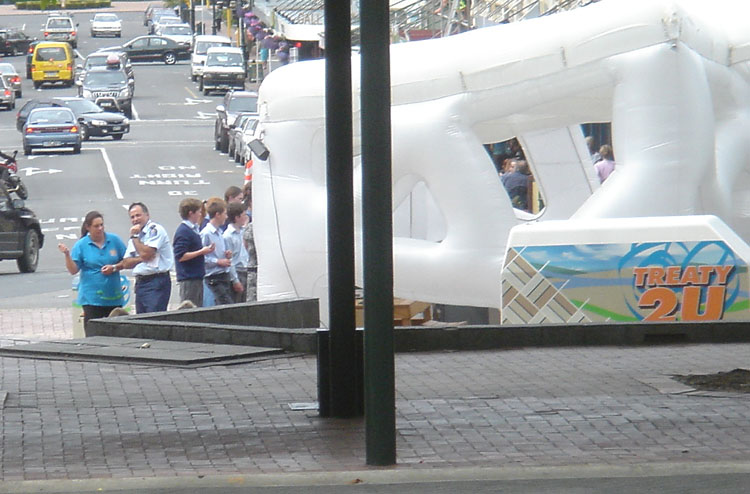 During the ONZF counter-tour, the Treaty 2U staff have tried every trick imaginable to bring down the wrath and "move-you-on", "shut-you-down" forces of police and county council authorities or others to stop the ONZF. Here, Marcia talks to yet another cop (this time at the Octagon of Dunedin City), who looks our way pensively. To their credit, the police and county councils saw nothing illegal about our protest and counter-exhibit activities and rarely bothered us, although we were obliged to have many conversations with them, initiated by the constant harassment of Treaty 2U staff telephone complaints flowing in.